The goal of this article is to:

There are other good resouces online about Hadoop streaming, so I’m going over old ground a little. Here are some good links:

If you are new to Hadoop, you might want to check out my beginners guide to Hadoop before digging in to any code (it’s a quick read I promise!).

I’m going to use the Cloudera Quickstart VM to run these examples.

Once you’re booted into the quickstart VM we’re going to get our dataset. I’m going to use the play-by-play nfl data by Brian Burke. To start with we’re only going to use the data in his Git repository.

Once you’re in the cloudera VM, clone the repo:

To start we’re going to use stadiums.csv. However this data was encoded in Windows (grr) so has ^M line separators instead of new lines \n. We need to change the encoding before we can play with it:

The way you ordinarily run a map-reduce is to write a java program with at least three parts.

Hadoop Streaming is actually just a java library that implements these things, but instead of actually doing anything, it pipes data to scripts. By doing so, it provides an API for other languages:

Streaming has some (configurable) conventions that allow it to understand the data returned. Most importantly, it assumes that Keys and Values are separated by a \t. This is important for the rest of the map reduce pipeline to work properly (partitioning and sorting). To understand why check out my intro to Hadoop, where I discuss the pipeline in detail.

It’s just like running a normal mapreduce job, except that you need to provide some information about what scripts you want to use.

Hadoop comes with the streaming jar in it’s lib directory, so just find that to use it. The job below counts the number of lines in our stadiums file. (This is really overkill, because there are only 32 records)

A good way to make sure your job has run properly is to look at the jobtracker dashboard. In the quickstart VM there is a link in the bookmarks bar.

You should see your job in the running/completed sections, clicking on it brings up a bunch of information. The most useful data on this page is under the Map-Reduce Framework section, in particular look for stuff like: 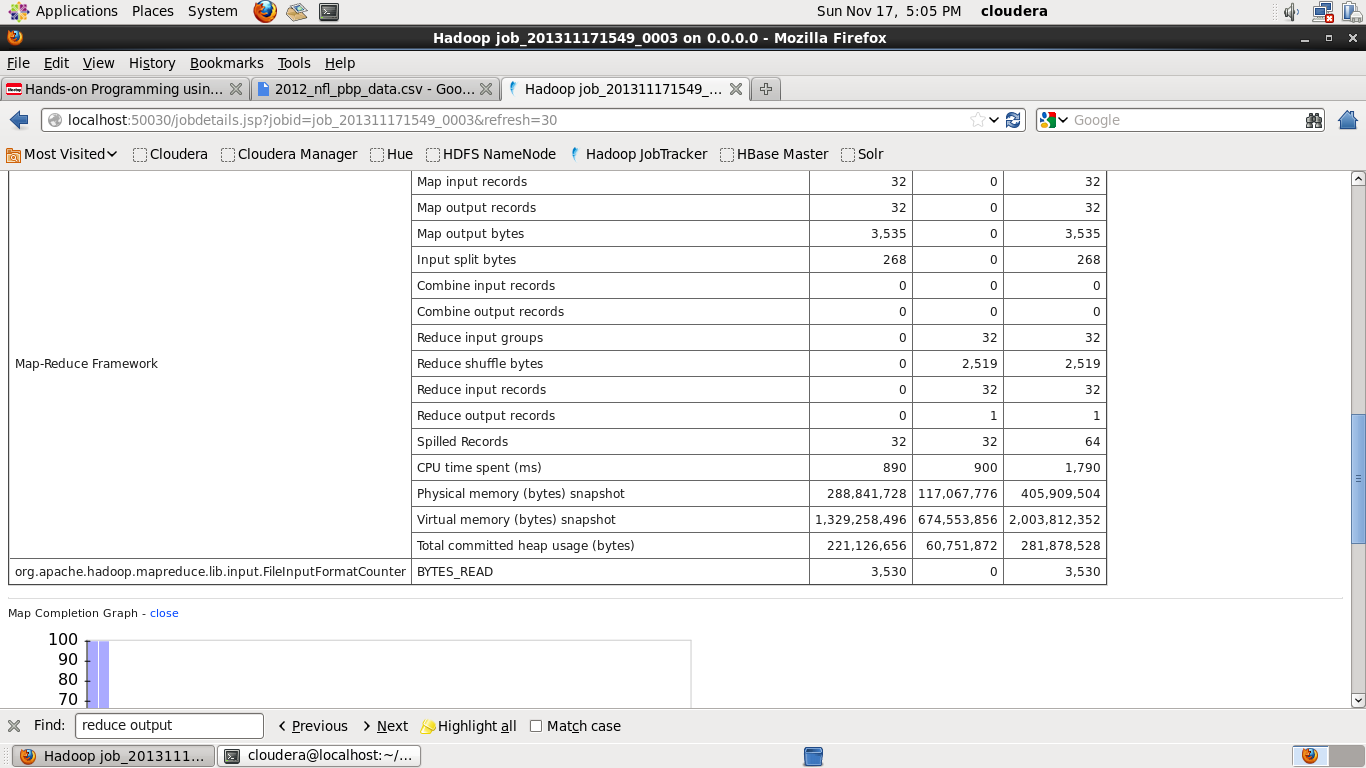 A Simple Example in Python

Looking in columns.txt we can see that the stadium file has the following fields:

Lets use map reduce to find the number of stadiums with artificial and natrual playing surfaces.

You can find the finished code in my Hadoop framework examples repository.

The reducer interface for streaming is actually different than in Java. Instead of receiving reduce(k, Iterator[V]), your script is actually sent one line per value, including the key.

So for example, instead of receiving:

This means you have to do a little state tracking in your reducer. This will be demonstrated in the code below.

To follow along, check out my git repository (on the virtual machine):

You might notice that the reducer is significantly more complex then the pseudocode. That is because the streaming interface is limited and cannot really provide a way to implement the standard API.

As noted, each line read contains both the KEY and the VALUE, so it’s up to our reducer to keep track of Key changes and act accordingly.

Because our example is so simple, we can actually test it without using hadoop at all.

Running with Hadoop should produce the same output.

A Complex Example in Python

Check out my advanced python MapReduce guide to see how to join two datasets together using python.

While there are no books specific to Python MapReduce development the following book has some pretty good examples:

While not specific to MapReduce, this book gives some examples of using the Python 'HadoopPy' framework to write some MapReduce code. It's also an excellent book in it's own right.