Is it 'MapReduce' or 'Map Reduce'?

MapReduce is a data processing methodology made popular by Hadoop. It describes a way that multiple computational units can work together to process a large scale dataset whilst acting independently and not depending on one another.

The short version is that the correct spelling is ‘MapReduce’. That is - all one word with R capitalized. You shouldn’t write ‘Map Reduce’ or ‘Map/Reduce’.

The Case for MapReduce vs Map Reduce

Google’s seminal paper from 2004 is titled MapReduce: Simplified Data Processing on Large Clusters. They’re very consistent about using MapReduce to describe the concept and nowhere in the paper do they split this into two words.

This is backed up by Google search traffic which shows MapReduce has a clear lead. 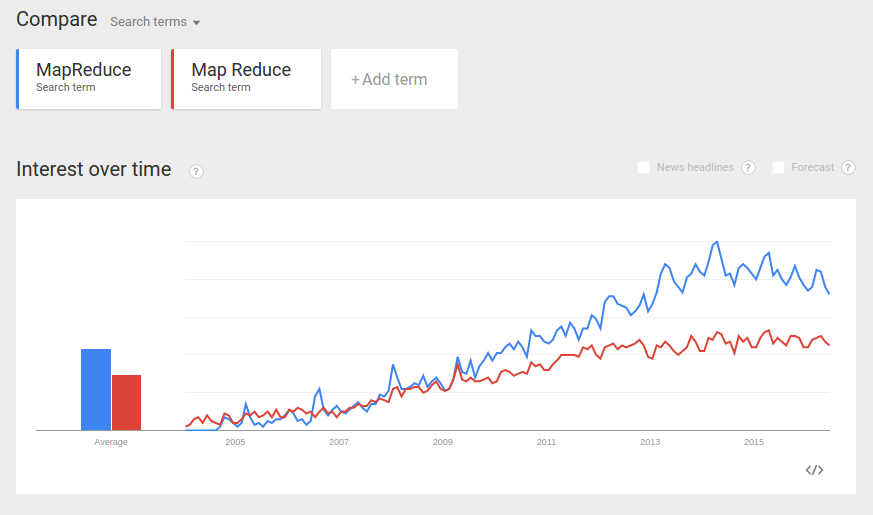 The Apache Hadoop website and big Hadoop vendors like Cloudera and Hortonworks refer to it as MapReduce also.

It’s Not All That Clear

However, outside of the Hadoop ecosystem naming is less clear. MongoDB has it’s own MapReduce implementation, but it is referred to as ‘Map-reduce’ (they don’t even capitalize the R! *Gasps*).

Even back in Hadoop-land not all content has settled on the MapReduce. There are several examples of places where folks are confused, or even use several different spellings.

It doesn’t really matter of course, but now you know – one MapReduce to rule them all.

While you’re here, check out my guide to MapReduce frameworks.

An Introduction to Hadoop and Spark Storage Formats (or File Formats) »